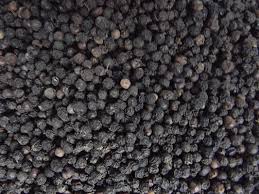 Pepper is often described as the “king of spices,” and it shares a place on most dinner tables with salt. The word pepper originated from the Sanskrit word pippali, meaning berry. Pepper is now grown in Indonesia, Malaysia, Sri Lanka, Vietnam, and Kampuchea as well as the West coast of India, known as Malabar, where it originated.

Black pepper (Piper nigrum) is a flowering vine in the family Piperaceae, cultivated for its fruit, which is usually dried and used as a spice and seasoning.

Pepper has been used as a spice in India since prehistoric times. Pepper is native to India and has been known to Indian cooking since at least 2000 BCE. Until well after the Middle Ages, virtually all of the black pepper found in Europe, the Middle East, and North Africa travelled there from India’s Malabar region. Little else is known about the use of pepper in ancient Egypt and how it reached the Nile from India.

The ancient history of black pepper is often interlinked with (and confused with) that of long pepper, the dried fruit of closely related Piper longum. The Romans knew of both and often referred to either as just “piper”.

The hot taste sensation in pepper comes from a resin called chavicine in the peppercorns. Peppercorns also are the source of other heat-generating substances, including an alkaloid called piperine, which is used to add the pungent effect to brandy, and an oil that is distilled from the peppercorns for use in meat sauces.

As a natural medicinal agent, black pepper in tea form has been credited for relieving arthritis, nausea, fever, migraine headaches, poor digestion, strep throat, and even coma. It has also been used for non-medical applications as an insecticide. Of course, black pepper is a favorite spice of cooks because of its dark color and pungent aroma and flavor.

White pepper is also commonly used and is popular among chefs for its slightly milder flavor and the light color that compliments white sauces, mayonnaise, souffles, and other light-colored dishes. White pepper is also true pepper that is processed in the field differently than its black form.

A mixture of black and white peppercorns is called a mignonette. Ground pepper is also popular in mixes of spices. Kitchen pepper is called for in some recipes for sauces and includes salt, white pepper, ginger, mace, cloves, and nutmeg. Pepper, therefore, proves itself to be a versatile and essential ingredient in combination with other spices, as well as in solitary glory in the pepper mill.

Black pepper (Piper nigrum)stimulates the taste buds in such a way that an alert is sent to to the stomach to increase hydrochloric acid secretion, thereby improving digestion. Hydrochloric acid is necessary for the digestion of proteins and other food components in the stomach. When the body’s production of hydrochloric acid is insufficient, food may sit in the stomach for an extended period of time, leading to heartburn or indigestion, or it may pass into the intestines, where it can be used as a food source for unfriendly gut bacteria, whose activities produce gas, irritation, and/or diarrhea or constipation.

Black pepper has long been recognized as a carminitive, (a substance that helps prevent the formation of intestinal gas), a property likely due to its beneficial effect of stimulating hydrochloric acid production. In addition, black pepper has diaphoretic (promotes sweating), and diuretic (promotes urination) properties.

Black pepper has demonstrated impressive antioxidant and antibacterial effects–yet another way in which this wonderful seasoning promotes the health of the digestive tract. And not only does black pepper help you derive the most benefit from your food, the outer layer of the peppercorn stimulates the breakdown of fat cells, keeping you slim while giving you energy to burn.

How to Select and Store

Black pepper is available whole, crushed or ground into powder. To ensure best flavor, buy whole peppercorns and grind them yourself in a mill just before adding to a recipe. In addition to superior flavor, buying whole peppercorns will help to ensure that you are purchasing unadulterated pepper since ground pepper is oftentimes mixed with other spices. Whole peppercorns should be heavy, compact and free of any blemishes.

Even through dried herbs and spices like black pepper are widely available in supermarkets, you may want to explore the local spice stores in your area. Oftentimes, these stores feature an expansive selection of dried herbs and spices that are of superior quality and freshness than those offered in regular markets. Just like with other dried spices, when purchasing black pepper try to select that which is organically grown since this will give you more assurance that it has not been irradiated (among other potential adverse effects, irradiating black pepper may lead to a significant decrease in its vitamin C content.)

Black pepper should be kept in a tightly sealed glass container in a cool, dark and dry place. Whole peppercorns will keep almost indefinitely, while ground pepper will stay fresh for about three months. Pepper can also be frozen although this will make its flavor more pronounced.

Tips for Preparing and Cooking

Tips for Cooking with Black Pepper:

Add pepper that you have freshly ground in a mill at the end of the cooking process. Since it loses its flavor and aroma if cooked for too long, adding it near the end will help to preserve its flavor.